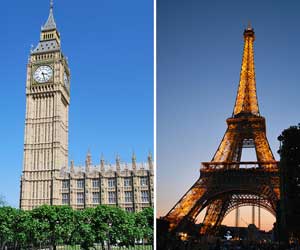 Meal: Indian Dinner
On arriving at the London International Airport, get received and assisted by our tour representative to get transferred to your pre-booked hotel in London city by a private car. On getting there, get checked into it and take a rest there. Spend the rest of the free time of the day in your hotel leisurely and stay there all the night long.

Meal : Continental Breakfast and Indian Dinner
Today, step out for the sightseeing tour of London city. During the tour, visit the BAPS Shri Swaminarayan Mandir, the first traditional Hindu stone temple of Europe and the first authentic Hindu temple in Britain. Next to it, explore the Tower Bridge – the renowned landmark of the city, the Palace of Westminster, the Tower of London, Big Ben, St. Paul’s Cathedral, Trafalgar Square, River Thames, Piccadilly Circus, London’s Eye and so on. Also get the chance of visiting the Buckingham Palace along with taking the fine glimpse of the Queen or Prince Charles by your good luck. At the end of your tour in this panoramic city, visit the Madame Tussauds Wax museum, home to the most renowned celebrities of the world. After this, leave for the haven port in Harwich town to board the Stena Line cruise. While taking the enjoyment of sailing to reach Hook of Holland by cruise ship, spend overnight on board.

Meal: Continental Breakfast and Indian Dinner
After getting down the cruise at Hook of Holland, leave for Amsterdam, the national capital city of Netherlands. On getting there, enjoy the sightseeing tour of this charming city. Later, proceed to Madurodam, the microscopic city in The Hague, the capital city of the province of South Holland. On reaching there, enjoy the sightseeing of the most historic structures of the country such as the renowned beaches of The Hague. Finally get driven to the City of Brussels, the national capital city of Belgium. On reaching there, get checked into your pre-booked hotel and stay there all the night long.

Meal: Continental Breakfast and Indian Dinner
Today, step out for the sightseeing tour of Brussels city. During the tour, visit the central square of the Grand Place, the Cathedral of St. Michael and St. Gudula, Atomium and the Manneken Pis statue. Later, head to Paris for the next travel. On getting there, get checked into your pre-booked hotel and spend overnight there.

Meal: Continental Breakfast and Indian Dinner
In the morning, leave straightly for the Eiffel Tower. There, while standing on the 3rd and the last level of this magnificent tower, get the golden chance of taking the really stunning bird’s eye view of the Paris city. After this, proceed to the river Seine to take the enjoyment of the cruise tour. Later, set out for enjoying the scenic tour of Paris city. During the tour, visit all the major monuments of this wonderful city. At first, explore the Louvre Museum and Glass Pyramid. At next, proceed to the island of the Paris city to visit the renowned Notre-Dame Cathedral. Later, get continued to enjoy the famous Opera Garnier. Finally, do visit the Champs-Élysées, the Concorde Square, the Pont Alexandre Bridge, the Les Invalides and the Arc De Triomphe. After this, return to your hotel to stay there all the night long.

Meal: Continental Breakfast and Indian Dinner
Today, spend the day as per your desire or set out for the Disneyland Paris (Euro Disney Resort), the most famous excursion destination of Paris. During your fascinating tour of this adventure land, enjoy the electrifying rides, including roller coasters and incredible 3D shows. Later, step by step, visit the Discovery Land, the Frontier Land, the Fantasy Land and the USA Main Street Paris. Finally, watch the Disney Characters Parade at the major square in the Disney World. By evening, get back to your hotel to spend overnight there.
Optional : As per your will, spend the evening leisurely by watching the Cabaret show, comprising a complimentary glass of Champagne and a soul stirring fantastic show.

Meal: Breakfast
Get checked out from your hotel and get timely transferred to the Paris International Airport to board your flight back to your desired destination.

Previous Next
Suresh Poddar
Tehri Garhwal
Rating: 4.2 - 984 votes
Before six months, I booked the Europe tour package from ARV Holidays. I am very thankful for Vibhor Ranjan, who arranged my tour so well. Because of his great client support, I was capable of taking the enjoyment of the Europe tour at its fullest. All the points of interest of this continent were very beautiful. Even in the future, I would prefer to book the tour package from ARV Holidays.
Rajesh Tiwari
Allahabad
Rating: 4.4 - 984 votes
Hi! Dear Ganesh! I am very thankful for you for taking care of me during all my Europe tour. As I booked my tour package from ARV Holidays, you organized my tour very well. You did not let me feel any problem a bit from the starting to the end of the tour. All the tourist facilities from flight, hotel accommodation, meals to tour guide for sightseeing tour were very satisfactory. I enjoyed the Europe tour at its fullest.
Rafat Malik
Bangalore
Rating: 4.9 - 984 votes
I thank you heartily for suggesting & arranging Europe Tour Package in so good manner. Last month, I went to Europe and visited some enticing countries with landscape & titillating sceneries. On the continent of Europe, I saw lofty snowy mountains, thick forests, culture & tradition centuries old. We also enjoyed delicious cuisines, shopping, adventure sports, famous dances, etc. Next time, I would like to take your services.
View All Traveller Reviews »