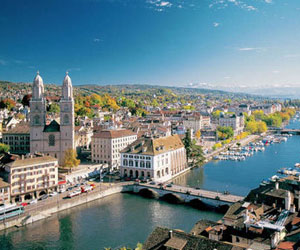 Meal : Indian Dinner
On arriving at the Paris International Airport, get received and assisted by our tour representative to get transferred to your pre-booked hotel in Paris city by a private car. On getting there, get checked into it and take a rest there. Spend the rest of the free time of the day in your hotel leisurely and stay there all the night long.

Meal : Continental Breakfast and Indian Dinner
In the morning, leave straightly for the Eiffel Tower. There, while standing on the 3rd and the last level of this magnificent tower, get the golden chance of taking the really stunning bird’s eye view of the Paris city. After this, proceed to the river Seine to take the enjoyment of the cruise tour. Later, set out for enjoying the scenic tour of Paris city. During the tour, visit all the major monuments of this wonderful city. At first, explore the Louvre Museum and Glass Pyramid. At next, proceed to the island of the Paris city to visit the renowned Notre-Dame Cathedral. Later, get continued to enjoy the famous Opera Garnier. Finally, do visit the Champs-Élysées, the Concorde Square, the Pont Alexandre Bridge, the Les Invalides and the Arc De Triomphe. After this, return to your hotel to spend overnight there.

Meal : Continental Breakfast and Indian Dinner
In the morning, leave for Zurich (Switzerland). En route, halt at Dijon to enjoy the tour of this city. Later, proceed to your destination. On reaching there, get checked into your pre-booked hotel. Spend the rest of the day leisurely. Stay at your hotel all the night long.

Meal : Continental Breakfast and Indian Dinner
In the morning, step out for the Mount Titlis to enjoy the extraordinary ride on the renowned Titlis Rotair, the world’s first rotating cable car. On this amazing mountain, get an abundance of time to enjoy and play in the snow. Here, explore the Ice Cave or head to the Indian restaurant for just taking a rest there. Later, visit the Glacier Park, unique in its own way with the rollick on snow tubes. By the afternoon, proceed to Lucerne, another charming city of Switzerland. There, get the chance of taking the enjoyment of the orientation tour including the Kappelsbruck, the famous Lions memorials. This place is famous for the impressive Swiss Watches, eye catching Swiss army knives, delicious Swiss chocolates, souvenirs and many more. By evening, return to your hotel to spend overnight there.

Meal : Continental Breakfast and Indian Dinner
In the morning, leave for Schaffhausen to watch the famous Rhine Falls (also called the ‘Mini Niagara Falls of Europe’), the largest plain waterfall in Europe. After this, proceed to the southern Black Forest, the home to Titisee Lake in Baden-Württemberg in Germany. On getting there, visit the Cuckoo Clock Factory in the Black Forest. In the afternoon, have your lunch (on your own cost). Later, leave for Munich city. On reaching there, enjoy the sightseeing tour of this magnificent city. After this, head to your pre-booked hotel in Munich to get checked into it and stay there all the night long.

Meal : Continental Breakfast and Indian Dinner
Today, leave for Wattens in Austria, home to the world famous museum ‘Swarovski Crystal Worlds (Swarovski Kristallwelten)’, having the collection of world-renowned Crystals. In this museum, also get the chance of watching the statue of ‘Chetak’, the favorite horse of Maharaja Rana Pratap – ornamented with the Gemstone Jewels of Swarovski. At this charming place, also get the chance of the shopping of jewelry and other souvenirs.

Later, head to Innsbruck, the capital city of the Tyrol Province of Austria. On entering this city, take the enjoyment of the guided tour covering the enjoyment of Goldenes Dachl, the Maria Theresa Square, the Trampoline Olympic ski jump, the Imperial Palace, the Golden Roof, the Royal Church, the river Inn and so on. After this, get driven to Salzburg. On getting there, enjoy the combined tour of the Mozart City, and the fascinating lakes and mountainous region, a perfect blend of history and splendid landscapes. Later, proceed to your pre-booked hotel in Salzburg to get checked into it and spend overnight there.

Meal : Continental Breakfast and Indian Dinner
In the morning, get driven to Prague city. On reaching there, take the enjoyment of the sightseeing tour of Prague City. During the tour, visit the Old Town, known as the ‘Heart of Prague’, home to the well-protected 13th century churches and houses. In the Old Town, get the chance of visiting the Old Town City Hall, the Old Town Square with the Astronomical Clock, the Estates Theater, the Municipal House and so on. Here, also visit the Metronome monument, located on the spot of the abolished Stalin's Monument. Later, proceed to your pre-booked hotel in Prague to get checked into it and stay there all the night long.

Meal : Continental Breakfast and Indian Dinner
Today, leave for Bratislava city. On getting there, take your lunch and proceed for the sightseeing tour of the city. During your tour, visit the most significant places and historic spots of the city like the Presidential Palace, the National Theater, Eurovea – the modern city center, the unique Blue Church of Noveau Art, etc. Ahead, explore the Bratislava Castle and Slavín war memorial having the fantastic scenic glimpses. From this fascinating castle, have the fine glimpse of the historical city center. Get continued your tour by getting driven along the Danube River, the Europe’s 2nd longest river after the Volga River. By doing so continuously, explore the grand remains of the Devin Castle, located above the meeting point of two rivers namely Danube and Morava offering a splendid glimpse over the countryside and the adjoining Austria. Before being blown up by the troops of Napoleon in 1809 A.D., the castle was a pristine stronghold of the Romans, Slavs and Celts, and a significant noble seat. After taking the enjoyment of the city tour, proceed to your pre-booked hotel in Bratislava to get checked into it and spend overnight there.

In the morning, get driven to Budapest. On reaching this magnificent city, visit the Buda Castle Complex: a blend of monuments and the scenic little streets, all situated on the Castle Hill. The most renowned sights of this complex include the Buda Castle, the Matthias Church, the Funicular, the Fisherman’s Bastion and the amazing panorama of Budapest. Besides this, take the fine glimpse of the Gellért Hill, Chain Bridge, Andrassy boulevard, the charming turn of the century buildings, Pest's best theaters, the Opera House, the Academy of Music, Heroes' Square, St. Stephen's Basilica and Váci Street. While standing on the Dome observation deck, get the superb scenic glimpses of Budapest. Head to the famous Gerbeaud Café to relish the coffee and cake. Also, take a stroll to the other end of the Central Market Hall for the renowned Paprika. After this, by evening, get driven back to your hotel in Bratislava to stay there all the night long.

Meal: Continental Breakfast and Indian Dinner
Today, get driven to Vienna. On getting this charming city, considered as the ‘City of Music’ because of its musical legacy and also called the ‘City of Dreams’ due to being home to Sigmund Freud, the first psychoanalyst of the world. During the Big Bus sightseeing tour of the city, explore the rich history of Vienna through the informative personal commentary. Being the capital city of Austria, Vienna is famous for charming gardens and palaces, pristine parks and magnificent monuments. Later, by evening, get driven back to your hotel in Bratislava to spend overnight there.

Meal : Continental Breakfast
In the morning, get driven to Vienna again. On reaching there, enjoy the very professionally performed classical concert occurring in the Orangery of Schonbrunn Palace. During the intervals as well as before and after the performance of concert, also get the chance of taking a walk in the gardens of this luxurious palace. By evening, get timely transferred to the International Airport to board your flight back to your desired destination.

Previous Next
Suresh Poddar
Tehri Garhwal
Rating: 4.2 - 984 votes
Before six months, I booked the Europe tour package from ARV Holidays. I am very thankful for Vibhor Ranjan, who arranged my tour so well. Because of his great client support, I was capable of taking the enjoyment of the Europe tour at its fullest. All the points of interest of this continent were very beautiful. Even in the future, I would prefer to book the tour package from ARV Holidays.
Rajesh Tiwari
Allahabad
Rating: 4.4 - 984 votes
Hi! Dear Ganesh! I am very thankful for you for taking care of me during all my Europe tour. As I booked my tour package from ARV Holidays, you organized my tour very well. You did not let me feel any problem a bit from the starting to the end of the tour. All the tourist facilities from flight, hotel accommodation, meals to tour guide for sightseeing tour were very satisfactory. I enjoyed the Europe tour at its fullest.
Rafat Malik
Bangalore
Rating: 4.9 - 984 votes
I thank you heartily for suggesting & arranging Europe Tour Package in so good manner. Last month, I went to Europe and visited some enticing countries with landscape & titillating sceneries. On the continent of Europe, I saw lofty snowy mountains, thick forests, culture & tradition centuries old. We also enjoyed delicious cuisines, shopping, adventure sports, famous dances, etc. Next time, I would like to take your services.
View All Traveller Reviews »