Mauritius is a land where different castes, religions and beliefs co-exist. As, a result, the land celebrates different festivals associated with varied faiths and religions. Some of the famous festivals celebrated here are described below : 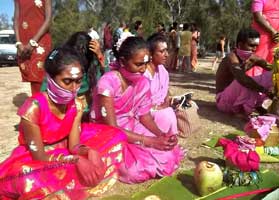 Cavadee or Thaipoosam marks the day when Goddess Parvati gave Murugan a "spear" to kill the devil Soorapadman. It is one of the most famous Tamil events celebrated in Mauritius. The word Thaipoosam is a combination of two words Thai (January/February) and poosam (a star). During the celebrations devotees with body piercings, walk in processions towards the temple carrying a “Cavadee” (a wooden arch) decorated with flowered with a pot of milk placed at the end of its base. After reaching the temple, it is placed before the deity as an offering. 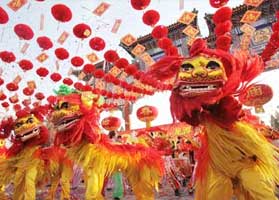 The Chinese Spring festival is celebrated during January/February. The festival is dominant with red, the color of happiness. The festival marks the Chinese New Year. On the celebratory day people cook great food and wax cake is distributed among friends and family. 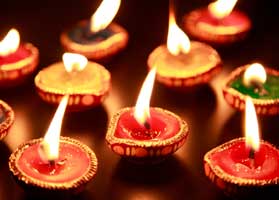 Divali, the “festival of lights” is celebrated in the month of October/November. It marks the auspicious day when Lord Rama came back to Ayodhya after defeating the evil Ravana. To welcome their Lord, the people of Ayodhya lighted diyas. On this day, the people worship, make their homes clean, wear new clothes, and distribute sweets among their friends and family. 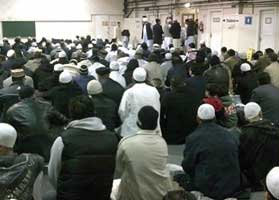 Eid-ul-Fitr marks the holy month of Ramadan. The festival is celebrated by the Muslim population of Mauritius. As part of the celebrations, the people offer prayers, arrange feast, visit their relatives & friends, and offer gifts to children (eidi). 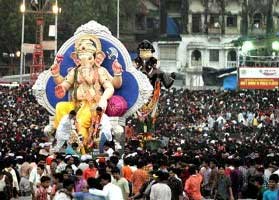 Ganesh Chaturthi is a Hindu festival, celebrated as the birth day of Lord Ganesha during the 4th day of the lunar month as per the Hindu calendar. On this day, people worship the Lord, carry processions, and dance. They also pray before the lord and present offering to Ganesha, the God of wisdom, who is believed to remove all obstacles from the life of his devotees. 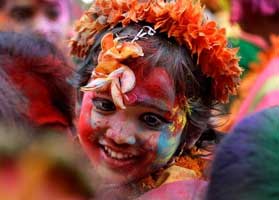 Holi, the festival of colors marks the beginning of the Hindu New Year. It is usually falls in the month of March every year. The festival is celebrated with great pomp and show, and people prepare different types of sweets & dishes for their friends & family, who visit them. People apply color to each other’s face and children love to throw their water filled balloons on passerby. 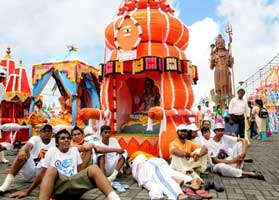 Maha Shivaratree, a Hindu festival celebrated in honor of Lord Shiva. On this day, the Hindus in Mauritius carry “kanwar”, wooden arches covered with flowers to the Grand basin. From here they fetch the holy water from the lake. The entire scene looks similar to that of the rituals performed on the Ganga River in India. 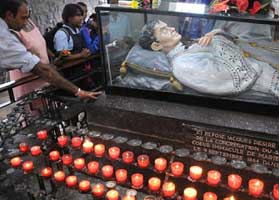 Père Laval Pilgrimage is celebrated by people of all faith in Mauritius in the month of September. As part of the festival, people visit the shrine of Father Jacques Désiré, in Sainte Croix. The devotees can catch a glimpse of the mortal remains of the holy man kept in a casket. 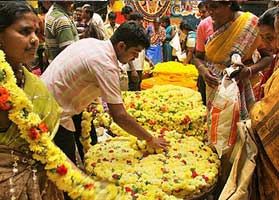 Ugadi, celebrated in March marks the beginning of New Year as per the Tamil calendar.